You will probably be familiar with the story of the Titanic, the 'unsinkable ship' sunk by an iceberg.  You may also know that the Titanic sank in 1912; so 2012 is the centenary.  But did you know the Titanic was built in Belfast? That's four of the five links.  What's the link with procurement?

To celebrate the centenary a landmark 'Titanic Signature Building' is being constructed in Belfast at an anticipated cost of £80m. It's the most expensive tourism project built in Northern Ireland. But a procurement iceberg has now appeared on the horizon. Although the building is unlikely to be sunk as it's already virtually constructed, there could be a dampening of the celebrations. The iceberg is in the form of the anticipated £20m European grant.  The £20m grant is now in doubt due to a perceived unsatisfactory procurement process, specifically a lack of competition in tendering for the construction.  In the midst of the current financial crisis I would hate to now try to find an additional £20m! 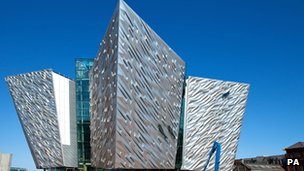 I've lost count of the number of times I have been told that a particularly large expenditure is 'outside' procurement as it is grant funded.  Typically it has been a research grant to a particular Professor, sometimes for a particular community initiative.  That's unacceptable and particularly naive if good procurement could make the grant go further.

All the facts of this particular case have yet to be revealed - the grant may well be received.

Nevertheless, there are clear lessons to be learnt.