The application of Porter's 5 Forces Model: Procurement resource or nemesis? 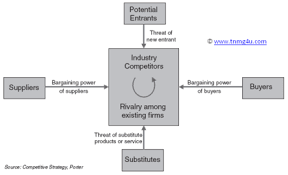 It's a funny old world. 5.5m results were found in a 'google images' search for Porter's 5 Forces Model. Hours are spent forcing the Model into students heads.  Yet could it be that using it as a tool for pragmatic analysis and development of strategy is cast aside on graduation like the mortar boards cast to the wind in pre-H&S days. Is the Model relevant or just a set piece of business school theory? If however we used the Model as a tool, would it suggest a change of strategy?

Let's think in terms of developing a procurement strategy. First we need to understand that the buying firm are in the middle - I appreciate that contradicts some well known texts!  As the buying firm we are part of a value chain supplying external customers and clients -  the buyers in this case are upstream from our firm.

While the bargaining power of buyers and, threat of of new entrants and substitutes should therefore be uppermost in the minds of the marketing manager, the later two should have a bearing on how the procurement manager thinks too and help in framing the procurement strategy.


When we refer to the firm's procurement strategy, the 'bargaining power of suppliers' relates to our suppliers.  The 'threat of new entrants' relates to potential new entrants which our customers could draw on (displacing us) but just as easily, how potential new entrants to the market could disturb the bargaining power of our suppliers and enable us to source elsewhere. The procurement manager would want to reduce the barriers to entry for potential new suppliers and in so-doing increase choice, potential new sources and a healthy competitiveness within the market. Equally, when we refer to the threat of substitutes we can view that as potential new products and innovations which could make us more competitive and replace the 'old spec'.

A few years ago I carried out some research on the Global Financial Crisis (GFC) and whether it had led to changes in procurement strategy. I was aghast to discover that the over-whelming response was that it hadn't - the respondents were, according to them, implementing a pre-GFC strategy, a strategy developed in an entirely different environment. Five years into the GFC I dread to think that the same situation may prevail. However, what I want to consider is whether a short term approach to procurement strategy may well be detrimental to long-term strategic objectives.

Let's consider the current environment which prevails in many countries.


In the short-term suppliers are under real pressure and can't access credit - working capital is their real worry but also access to funding for longer-term investment. In turn they are at risk of going 'bust'. If they are a supplier on which the buyer is dependent, that in turn increases the buyer's risk profile. To mitigate against that increased risk, the buyer could be expected to opt for multiple sourcing. From the supplier's perspective, any shift by the buyer to a multiple sourcing approach, say dual sourcing, means the supplier will have even less demand from the buyer and therefore increases the supplier's risk - it's a vicious circle of amplification of risk.

Assume the buyer is clear that their primary short-term strategic objective is cost reduction. That translates to strategies of 'reduce transaction costs' and 'pay less'. The buyer's knee-jerk reaction is to place more pressure on suppliers and expect them to 'sharpen their pencils' (I've had 30 years detesting that phrase).  There is a shift towards adversarial and competitive sourcing; effectively dismantling the partnership ethos advocated since the 90s - but then again everything has changed and a lot has been learnt since the economic crisis of the 90s (excuse the sarcasm).

The buyer exerts all available pressure on the supplier. The supplier needs the business so accepts the need to price on marginal costs in the hope that fixed costs can be recovered from more benevolent buyers and buyers who are taking a longer-term perspective. Let’s not forget that if the supplier’s agent doesn’t match their sales targets they are 'toast' anyway. So effectively the supplier is being pushed into selling at a non-sustainable price, one that just isn’t economically viable since it doesn't contribute to fixed costs. If both supplier and buyer are adopting a short-term strategy the long-term consequence could be at best an exit of suppliers from the market, leaving a long-term monopoly and shift of power from the buyer to the whichever suppliers remain, and, at worst a failure of the buyer to be able to source what is required for the buying organisation to satisfy its customers.


In parallel, given the short-term difficulties of the supplier being able to access credit, they could be expected to defer their own investment in both research and development and in the assets required for the core business. Not only could they be expected to ‘park’ R&D but they could be expected to try to extend the life of their kit, say stretching an extra few years (I recently came across one organisation which should have replaced their operational equipment after five years but due to 'austerity' had stalled replacement and stretched the life of the equipment to eight years. The problem was they were incurring additional maintenance costs and their delivery was compromised, leading to customers shifting to alternative providers!). The buyer may of course feel this will not impact on them until they recognise that supplier investment in R&D is an investment which the buying organisation gains from in ongoing competitive prices and access to innovation. So while the buyer may have a short-term gain they may have a long-term cost; they may even find that their competitors, in the medium term have a cost advantage as a result if their supply chain using more efficient assets. If we place this in a national context, the knock-on effect could be a failure in national industrial strategy.

Now let’s consider the threat of new entrants.  We have discussed that removal of barriers to entry should be of benefit to the buyer.  However, the current economic environment is itself a barrier to new entrants - something buyers have little control over. If there are a lack of new entrants to the buyers market the buyer is starved of choice. But this scenario only exacerbates the adverse impact of existing supplier failure. While there may well be a lack of new entrants in the domestic market, that doesn't mean that there are no new entrants - the buyer therefore needs to consider increasing the scope of their market search and ensuring that they remain a preferred customer. Is there evident evidence that is happening?

When we think of the threat of substitutes we can view that in the context of alternatives to our existing specifications.  Once again we have an interesting dynamic. Is the current environment creating the right circumstances for experimenting with new specifications? Ironically, that is likely to depend on the risk appetite of the buying organisation.  Some organisations and staff will be risk averse and resist experimentation, while others will welcome the potential for cost reduction and enhanced customer experience. The stakes are high - will that be thrashed out in the procurement strategy?

Of course buyers and suppliers are mutually dependent on each other but are their destinies currently being shaped by a naive approach to procurement strategy and failure to pragmatically apply Porter's Five Forces Model?

A short-term opportunistic procurement strategy could lead to:

A short-term focus could lead procurement to ultimately compromising the long-term success of the firm and even the supply chain. Quite simply we could be creating dynamics which work against the buyer when we have reached the economic recovery. Short-term gain leading to long-term loss.

The current financial crisis has the potential for procurement to demonstrate its real strategic contribution. The profession stands on the edge of opportunity - but could that opportunity, wrongly grasped, become procurement's nemesis.

We could however ask, 'in what circumstances would the short-term gain at long-term expense be the right choice?' I suspect for those who don't expect to be in the organisation in the long-term. Somehow we have got to create the right incentives to avoid procurement strategy architects seeing that their own short-term gain is more attractive than the long-term organisational and supply chain good.

How would you advise?