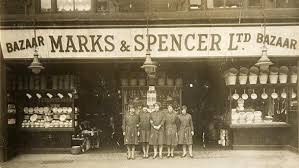 It never ceases to amaze me when I read the bizarre M&S label which extols 'Inspired by Italy' - what does such a bizarre claim really mean?

We know M&S has diversified and is now a bank - you can get one of their credit cards with an APR of 16.9% - I wonder what Mr Marks and Mr Spencer would have thought of that diversification strategy and the idea that customers would pay over the odds to acquire something today and then pay later. But then Mr Marks & Mr Spencer grew up in different times - banks were the friends of business and they didn't bring businesses and countries to their knees.

Mr Marks & Mr Spencer may also find the whole talk of a  'Plan A' which addresses CSR quite bizarre. That's a long way from haggling with their suppliers then handing over the cash. But like 'Inspired by ...' what do such claims really mean?

I suspect Mr Marks & Mr Spencer would find it not only bizarre but be appalled by the notion of refusing to pay their suppliers in a reasonable time.

Yet now we see the convergence of banking, CSR, supply chains and a firm going through a mid-life crisis. The result, in spite of being signed up to CSR, and the Prompt Payment Code is to reach for the contract terms and beat the small guy over the head. So now it appears M&S have depersonalised business relationships and told their clothing suppliers they will slow down their payment, from 60 days to 75 days after receipt of goods. While supply chain financing is being viewed elsewhere as a panacea (and ironically M&S have made that commitment too) something seems to have got lost on the road to recovery with M&S. We can only assume suppliers will suffer, and that all the talk of M&S being committed to ethical trade has got lost in translation. Like 'Inspired by ...' what does M&S commitment really mean?

Ethics and behaviour at M&S, to Mr Marks and Mr Spencer, may appear very, very bizarre.
Posted by Dr Gordy at 14:01