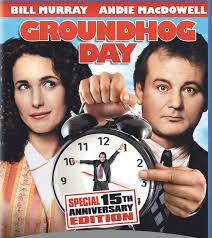 Supply Management has covered a news item that the government will review public sector food procurement with a view to reducing leakage from UK agriculture sector. Isn't this yet another Groundhog Day for UK public procurement? Back in 2003 we had the Public Sector Food Procurement Initiative. I spent many hours at meetings and training days which were aimed at strategically using UK public procurement to deliver UK farming benefits.

I have previously discussed the Groundhog Day approach to UK political procurement (and here). The Groundhog Day approach to procurement policy is interesting. Imitation is said to be both the best and most sincere form of flattery - there must be some agreement that these policy through procurement initiatives, conceptually at least, have some merit. They also have the potential of being good political platform announcements - when a politician makes a conference speech the concept may well resonate with the audience and few appear to stand up and shout 'Groundhog Day'. The Groundhog Day Policy must also give the person who suggested the recycled initiative some kudos.

It does strike me as strange that opposition MPs, who may well previously have led on these Groundhog Day initiatives, aren't asking questions and attempting to break the cycle. Either way, as I say, the policies, generally appear to be good, pity about the implementation and performance management.

Any suggestions as to what the next Groundhog Day procurement policy will be?
Posted by Dr Gordy at 09:21