I was surpised to see BBC Northern Ireland present a flawed argument against public procurement today.  In a nutshell the PQQs, which I agree are frequently inappropiate and cumbersum, are being blamed for:
The public sector is spending vast sums of public money - there is no shortage of criticism, including on this blog, of how that money is sometimes badly spent.  However,
it is good public procurement to identify and manage risks.  Part of that risk management process is to make use of PQQs to ensure potential bidders have the economic and financial standing, technical capability and technical capacity to see the proposed project successfully through to completion.  I have separately discussed the problems of suppliers going bust in relation to the recent implants scare - getting the wrong provider can add to public costs.

Do not get me wrong, I am categorically not condoning inappropriate design and use of PQQs.

The report suggests that a Cookstown builder's reputation counts for nothing - on the contray the PQQ should extract the evidence behind a good reputation and also reduce the likelihood of those with a poor reputation winning business.

Our friend in Cookstown can also use PQQs from other public sector organisations to demonstrate his good name where otherwise he would not have been known and thereby be able to access what may have been 'closed contracts' to him.

The appropriate use PQQs, contrary to the report, should reduce costs.  Completing a PQQ is significantly less costly than pricing a tender document.  The PQQ should lead to a reduction in the number of bidders being asked to complete the pricing of costly tender documents. Only those who have demonstrated the ability to successfully complete the project through the PQQ incurr that cost and therefore the industry as a whole have a reduced cost. The cost of failure, and let's face it, competitive procurement generally has more losers than winners, is reduced. 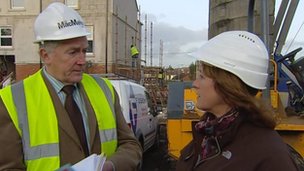 The aggreived contractor says  "We've got it on good authority that very few contractors are getting over the line. It's very frustrating, very annoying and very demoralising."  As I have implied above, it would be much more costly if all contractors got over the line - that would effectively defeat the purpose and add cost to the sector.

The report highlights that there have been 53 insolvencies among building firms in the 2009/2011 financial year.  It would be have been more useful if the report had also highlighted that PQQs aim to reduce the risk to the public purse of suppliers becoming insolvent afer being awarded a public contract - in that situation the costs of awarding that work to another contractor could be expected to increase the publc bill significantly.

Finally the report implies that PQQs have contributed to the loss of almost 33,000 peoplewho were working in the construction sector in September - down 8.5% on the previous year.  This strikes me as a very clear flaw in the argument against PQQs.  PQQs do not reduce the amount of contruction works taking place, the work is still awarded to one contractor, who is also hopefully the most appropropiate contractor. The only displacement of workers which takes place is if the winning contractor uses less staff, of course, it is also possible that the PQQ by taking a wider view are also shifting contracts to the more appropriate firm who may actually have more staff than their competitors!

It would be great if the BBC could spend some more time gathering the evidence for and against PQQs - that would be a real help all round.
Posted by Dr Gordy at 13:20